Judgment of the gods of Egypt by the true God of Heaven. Exodus 5-13 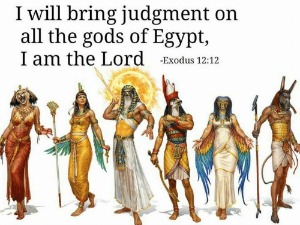 There have been few dramas that can equal the story of the Exodus. Yet while most Christians are familiar with the events of Passover, few of us are probably aware of the significance behind the other nine plagues.

Each of the nine plagues targeted specific ancient Egyptian gods, they were part of an invisible cosmic war against the devils of darkness. The plagues were a powerful and dramatic demonstration of the supremacy of the true and living God of Abraham and Moses. 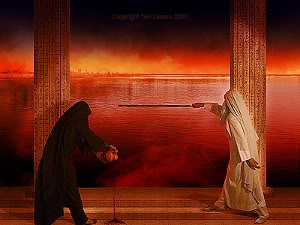 The first of the judgments was upon the waters of Egypt. The Nile was the highway of this ancient land, as it still is today. Not only was the Nile turned to blood, but the other waters of the land were as well, even the water that was drawn for use in the houses in wooden and stone jars. For seven days the whole land was in horror, with dead fish and a stench from the river.

To better appreciate what was going on, we must examine the numerous gods of the river: Osiris, one of the chief gods of Egypt, was first of all the gods of the Nile. He, with his companion, the mother god, Isis, and their child, Horus, were human-headed gods (in contrast to the many that had heads of birds, beasts, and reptiles). There were other gods of the Nile, too: Hapimon in the north, and Tauret at Thebes, and the hippopotamus goddess of the river. There was also Nu , the god of life in the Nile. The supernatural pollution of the waters of the land were a humiliation to the gods the Egyptians worshiped. 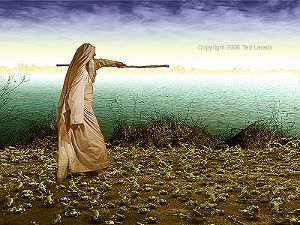 The second of the wonders further proved the powerlessness of the gods of Egypt. The land was covered with a plague of frogs in such abundance that they infested the Egyptians’ houses and beds. One of the principal goddesses of the land was Hekt , the wife of the creator of the world, who was always shown with the head and the body of a frog. The frogs came out of the sacred Nile and Egypt’s devotion to them prevented them from dealing with them: they soon had decaying carcasses throughout the land, resulting in a stinking horror. (It is interesting that the climactic war against God in Revelation is assembled by three frog-like spirits.) 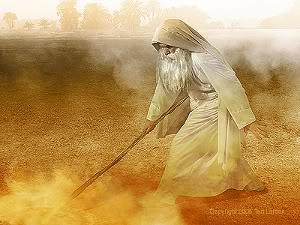 The third of the judgments on Egypt came out of the soil in Egypt. The Hebrew word ken, is translated "lice" in our English translation, with "sand flies" or "fleas" in some marginal notes. The Hebrew word comes from a root meaning to dig; it is probable that the insect was one which digs under the skin of men. This was an embarrassment to their great god of the earth, Geb, to whom they gave offerings for the bounty of the soil. Also the presence of the fleas or lice were a barrier to their officiating in their priestly duties! 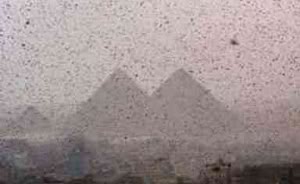 The fourth of the plagues were "swarms" ("of flies" is not in the original). The word is `arob, a swarm, possibly suggesting incessant motion. The deification of the scarab beetle is still conspicuous – even today – in the jewelry and artifacts celebrating ancient Egypt. Amon-Ra, the king of the gods, had the head of a beetle. Some of the giant scarabs were even accorded the honor of mummification and entombment with the Pharaohs.

This is particularly bizarre since the scarab is actually a dung beetle. The insect is about the size of a nickel and feeds on dung in the fields or the side of the road. When animals defecate, these insects swarm from their holes in the ground and collect their provender for future meals by forming it into round balls about the size of golf balls, which they roll across the ground to their underground dwellings. Since they seemed to "come from nowhere," and perhaps because these perfectly round balls were possibly associated with the sun, these beetles became associated with creation.

The plague of swarms of scarabs, with mandibles that could saw through wood, and destructive qualities worse than termites, must have caused extreme consternation since they were so venerated and thus were not to be interfered with! Pharaoh called Moses, pleaded for a cessation, hinted at the possibility of compromise, and even asked to be prayed for. But God doesn’t compromise; the judgments continued. 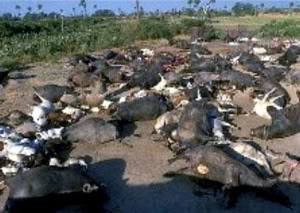 The fifth plague was against the domestic animals of Egypt, and thus Apis, the bull god, and the cow-headed Hathor, goddess of the deserts. These were so widespread that even the children of Israel had become tainted by their worship, which led to the fiasco of the golden calf in the image of Apis.

The plague was a "murrain," a contagious disease among the cattle, and even the sacred bulls in the temple died. Other domestic animals were sacred also, and their images adorned many of the idols, such as Bubastis, the cat goddess of love, feminine matters and fashion, etc. (The veneration of cows still creates a sight in India, when cows appear on the streets and even in stores and shops.) The cattle of the Hebrews, of course, were not touched. 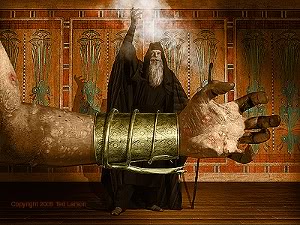 The sixth wonder was manifested against the bodies of men. The plague of shechiyn, translated "boils”, may hide something more terrible. The root means "burning”, and the same word can be translated as leprosy, and as the Egyptian botch, which was declared to be incurable.

Among the gods to which cures would have been ascribed were Thoth, the ibis-headed god of intelligence and medical learning, and Apis, Serapis and Imhotep. Here even the magicians did not escape and could not carry on their priestly functions. It was their custom to take the ashes of human sacrifices and cast them into the air. Borne by the wind over the milling populace, they were viewed as a blessing. (It is inferred by some that this heathen custom was the source of the practice of putting ashes on the forehead on the first day of Lent.) Moses launched this plague with a parody of this practice, and may even have had access to the very furnaces used in the sacred precincts of the royal temple. 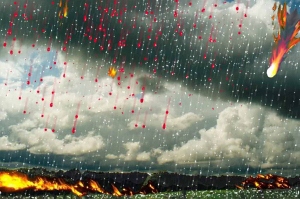 Egypt is a sunny land with virtually no rain. The seventh wonder was a tempest of hail and fire. Where was Shu, the wind god? And Nut, the sky goddess? Where was Horus, the hawk-headed sky god of upper Egypt? When Pharaoh confessed his sin and the sin of his people, he even used the Hebrew names for God:

"I have sinned this time: the Lord is righteous, and I and my people are wicked. Intreat the Lord that there be no more mighty thunderings ["voices of Elohim"] (Exodus 9:27, 28)."

(The French have a phrase for one who speaks with spiritual language but whose heart is far from God: le patois de Canaan, the dialect of Canaan.) 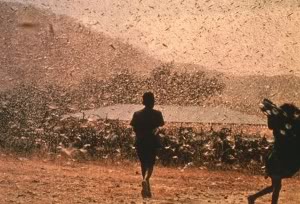 Some of the earlier plagues may have been separated by extended intervals, but the eighth plague followed immediately on the heels of the seventh: locusts came upon the land. Every twig and leaf that had somehow escaped the hail and fire was now taken by the locusts. Where was Nepri, the grain god? Where was Ermutet, goddess of childbirth and crops? Where was Anubis , the jackal-headed guardian of the fields? And where was Osiris, great head of their senior trinity who was also their agricultural god? Having lost faith in their gods, rebellion was now in the air. 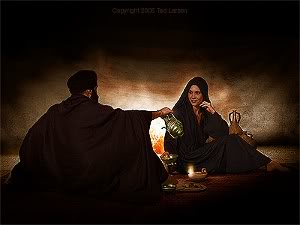 The ninth wonder was a darkness that could be felt! Josephus writes:
"But when Moses said that what he desired was unjust, since they were obliged to offer sacrifices to God of those cattle, and the time being prolonged on this account, a thick darkness, without the least light, spread itself over the Egyptians, whereby their sight being obstructed, and their breathing hindered by the thickness of the air, they were under terror lest they be swallowed up by the thick cloud. This darkness, after three days and as many nights was dissipated."

And then in Exodus 10:22-23, "And Moses stretched forth his hand toward heaven; and there was a thick darkness in all the land of Egypt three days. They saw not one another, neither rose any from his place for three days: but all the children of Israel had light in their dwellings."
Where was Ra, god of the sun? In the school of On, or Heliopolis, city of the sun, the worship of Ra was virtually almost monotheistic. He and Aten, the sun’s disc, were worshiped with the ankh, symbol of life from the sun, as almost a sort of trinity. Where was Horus, the god of the sunrise? Or Tem, the god of the sunset? Or Shu , the god of light? Or the deities of the moon and planets? 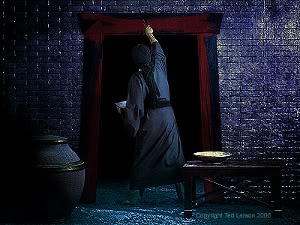 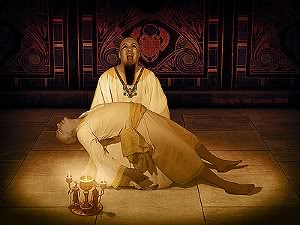 And, of course, the well-known tenth and final plague was the death of the firstborn – on those homes not covered by the lamb’s blood on the doorposts or lintels. We all know the story of the Passover in Egypt, remembered by the Jews to this day. And, of course, Ya-Hweh Yahuwshua, The LORD Jesus Christ, is our Passover: John the Baptist introduced Him twice as "The Lamb of God." 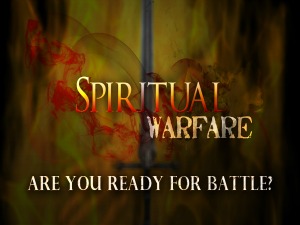 The invisible war goes on. These same devils are worshiped today. The Scriptures tell us that we become like the gods we worship. Visit Egypt today and when you leave Cairo you will see villages living on dung hills. And this is not a typical "third world" country: it once ruled the known world! If you worship the world, you, too, will become materialistic, harsh, and unforgiving. You will become like the gods you worship. But if you worship Ya-Hweh Yahuwshua, The LORD Jesus Christ, who loved us and gave himself for us, you will become more like Him!

To the Apostle Paul haters:

The Apostles trained their disciples to respect Paul very highly, as evidenced in the extant writings of Polycarp, Clement, etc.

So, the argument is really about who is more credible, the Apostles and their disciples or these accusers 2000 years removed? These Anti-Paul loons...They only reveal their ignorance.

Read Polycarp's (disciple of John) letter to the Philippians.

Also, Irenaeus (disciple of Polycarp) canonized the writings authorized by the Apostles through their disciples in 180 AD and Paul's writings were included.